A working healthcare system is not just a noble goal, but a requirement for us all. Even for those who are young and healthy, a functioning system is something to strive for. Because even if you are healthy you may at some point find yourself a trauma victim needing urgent care to save your life. Unfortunately, for those who live in America they may not have any choice but to pay the price to play the game. Some people are concerned with the cost recently of privatized healthcare, both financially and in terms of human lives lost. Medicare-for-All is the best solution to address these concerns in America

The human cost of privatized healthcare

21-year old Jesimya David Scherer-Radcliff died due to the monetary fee associated with healthcare in the U.S (Intelligencer). Jesimya’s death was not a one-off incident. Intelligencer says, “The price of insulin has doubled between 2012 and 2016,”(Jones, Sarah). “The cost of insulin is ridiculous,” Jesimya’s father said (Jones, Sarah). The life of Jesimya was lost due to a dollar figure being placed on the value of his life.  Another victim, 26-year old Alec Raeshawn Smith died a month after ageing out of his mother's health insurance (Sable-Smith). Like Jesimya, Alec’s life was cut short in the prime of his life due to the greed of pharmaceutical and insurance companies. Rationing insulin is a dangerous solution to a problem that affects too many. The pharmaceutical industry has made the ability to live unaffordable for far too many.

Under a system where companies choose profits over saving human lives, kids like Jesimya and Alec will continue to succumb to preventable deaths. Diabetes is both manageable and treatable. Yet somehow Jesimya and Alec were allowed to slip through the cracks when their existence no longer generated a profit for a company. Diabetes in the case of Jesimya and Alec is just one example of a case when our system has been unable to accomplish it’s only goal; provide healthcare to our people.

The financial cost of privatized healthcare

Another example of the growing cost of healthcare in the US The National Academies says,“[T]he case of the leukemia drug imatinib (Gleevec). Upon its U.S. release in 2001, it cost $4,540 per month of treatment. In 2016, after 15 years on the market, it cost $8,500 per month in the United States, but cost $4,500 and $3,300 per month in Germany and France, respectively,”(National Academies of Science). See Fig 1-1. This is just one example of the cost difference between the US and other countries. 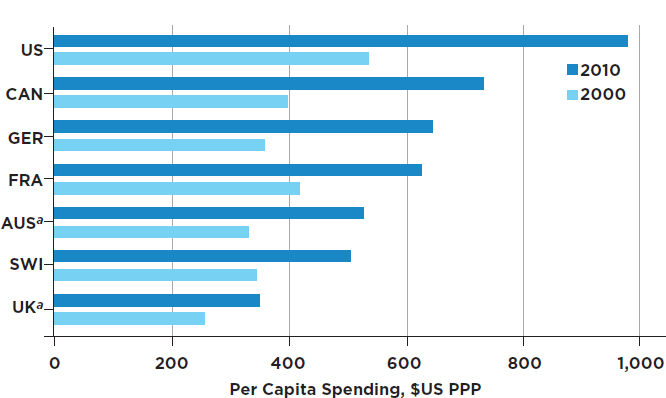 Fig. 1-1. “Total pharmaceutical spending per capita (depicted in U.S dollars using power Parity, PPP, as reference) in seven countries (200 and 2010) with the United States showing the  highest increases in comparison with other major countries”(National Academies of Science).

The US has a very unique system of healthcare that places a larger cost on patients then other countries. Dr. Irene Panicolas assistant professor Department of Health Policy London School of Economics and Political Science says, “The United States spends more per capita on health care than any other nation, substantially outpacing even other very high-income countries,”. Even with a higher spending level “[T]he United States performs poorly in areas such as health care coverage and health outcomes. Higher spending without [corresponding] improved health outcomes at the population level has been a strong impetus for health care reform in the United States,”(Dr. Panicolas). Dr Panicolas concluded,” [T]he United States spent approximately twice as much as other high-income countries on medical care and fared worse on common population health outcomes such as life expectancy and infant mortality,”. The experts have clearly articulated a problem with the american health system, but it doesn’t need to be this way. Politicians could offer solutions, and some are.

Bernie Sanders, a U.S senator, ran for president in 2016 and 2020 on a platform to change the American health system. Sanders made a plan that would “[c]reate a Medicare for all, single-payer, national health insurance program to provide everyone in America with comprehensive health care coverage, free at the point of service,”(Sanders). Some of the benefits of such a plan are as Sanders said,”No networks, no premiums, no deductibles, no copays, no surprise bills,”(Sanders). Sanders plan to “[s]top the pharmaceutical industry from ripping off the American people by making sure that no one in America pays over $200 a year for the medicine they need by capping what Americans pay,”(Sanders) could be an immediate benefit to Americans who pay $8,500 a month for leukemia drugs. But those are not the only people who would benefit under Sanders' plan.

People like Jesimya and Alec may still be alive today if Medicare-for-all was implemented. If such a system was in place Jesimya and Alec could have gotten their insulin without a copay. Such a scenario could mean they might not have had to ration their insulin. We can demonstrate how rationing of insulin is a dangerous solution to a problem that exists far too often under privatization of healthcare. With a Medicare-for-all system America could work towards no longer spending twice as much on healthcare than other high-income countries (Papanicolas).  By capping what Americans pay for drugs, money could be saved. By eliminating the for profit interest in healthcare, money could be saved.  Low- and middle-income families would have more money in their pockets if they don’t have to spend money on healthcare.


Table 1-1 Source: Families USA Calculations based on estimates by the Institute of Medicine. ( Families USA)

Insurance matters as the underinsured often go without screenings and preventive care Families USA says, “Uninsured adults are nearly four times more likely than insured adults to delay or forgo getting a preventive care screening due to cost (36 percent versus 10 percent),” ( Families USA). Women need specialized care and are especially affected by going without insurance Families USA says,”Uninsured women over the age of 50 were about half as likely to have gotten a mammogram in the past two years as insured women (42 percent versus 79 percent),” ( Families USA).

Without Medicare-for-All, the wealthy will continue to receive better treatment. Under privatized healthcare, doctors may choose their insurance networks. Currently there's nothing stopping a doctor from only accepting luxury insurance groups that charge high prices making them out of reach for working class Americans to afford coverage under. With higher paying clients, these elite doctors can be more accessible to their patients at the expense of everyone else. Mehwish Qasim, a doctoral candidate in the Department of Health Management and Policy University of Iowa, said, “Patients residing in low-income communities fared significantly worse on six of the eight mortality measures in both 2000 and 2009.” (Qasim) He added, “Low-income people are also more likely than those who are better off to be either covered by Medicaid or uninsured … These characteristics have been shown to be associated with poorer surgical outcomes.” (Qasim) These differences in treatment are concerning, but it doesn’t need to be this way.

Medicare-for-All is a single payer system, where all treatment is paid for from a single source (Sanders). By eliminating the various insurance pools that favor those who can afford to pay high premiums, the healthcare field in the U.S could be equalized. A single payer system would allow people to receive treatment based on need of care, and not ability to pay (Sanders). Only when money is removed from our people’s healthcare will differences in income no longer mean differences in health outcomes. Equality in healthcare is not just a noble goal, but a requirement for us all. We must implement socialized medicine.

Covid-19 has shown us what happens when you don’t have socialized medicine. Our current situation has made it clear why having your healthcare tied to your job is the stupidest idea ever. During a global health crisis, some people are losing their jobs and thus their healthcare. Covid-19 would have never been easy to contain, but without access to healthcare among large swaths of the population health outcomes will be worse (Qasim). A universal program like Medicare-for-All would have allowed people to have access to the healthcare they need to survive, regardless of employment status (Sanders). While this is one benefit of socialized medicine, some people are worried about being socialized.

One concern of socialized medicine in the U.S is that it’s socialism. Some are concerned you cannot have socialism without eliminating capitalism. The reality, as seen in Canada, is you can have socialism and capitalism. You need socialism to limit what can be capitalized on by capitalism. One thing we shouldn’t be capitalizing on is our people’s health. Our people have a right to live a decent life; that means having access to the essentials like food, water, shelter and healthcare. Another concern expressed in opposition to Medicare-for-All is that socialism would eventually lead to us being Venezuela.

Venezuela is not an accurate representation of socialized medicine. Venezuela is not a democratic-socialist nation, they are an authoritarian nation. For a practical comparison one must look at nations previously mentioned such as Canada, Germany or Switzerland where a single-payer system is a huge success. In these nations, they pay approximately half as much for healthcare and have health outcomes that perform better than the U.S (Papanicolas). These nations have shown that any concerns about socialized medicine only exist on paper, as the implementation around the globe has shown us consistent success.

Jones, Sarah. “Another Person Has Died From Rationing Insulin.” Intelligencer, Intelligencer, 16 July 2019, nymag.com/intelligencer/2019/07/another-person-has-died-from-rationing-insulin.html. Good resource for exploring the basics of how the rationing of insulin is a dangerous solution to a problem that affects many

Papanicolas, Irene, et al. “Health Care Spending in the United States and Other High-Income Countries.” Jama, vol. 319, no. 10, 2018, p. 1024., doi:10.1001/jama.2018.1150. A clear analysis of the cost of healthcare in the U.S, healthcare in other nations and potential explanations for the differences. Good resource for exploring the benefits of a single payer system or the drawbacks of privatized healthcare.

Sable-Smith, Bram. “Insulin's High Cost Leads To Lethal Rationing.” NPR, NPR, 1 Sept. 2018, www.npr.org/sections/health-shots/2018/09/01/641615877/insulins-high-cost-leads-to-lethal-rationing. Good resource for exploring the basics of how the rationing of insulin is a dangerous solution to a problem that affects many.

Sciences, National Academies of, et al. “The Affordability Conundrum.” Making Medicines Affordable: A National Imperative., U.S. National Library of Medicine, 30 Nov. 2017, www.ncbi.nlm.nih.gov/books/NBK493099/. In depth study of the costs of healthcare in the United States. Explores both some challenges and potential solutions while also serving as an overall introduction into U.S healthcare.

Qasim, Mehwish, and Roxanne M. Andrews. "Despite overall Improvement in Surgical Outcomes since 2000, Income-Related Disparities Persist." Health Affairs , vol.32, no. 10, 2013, pp. 1773-80 . ProQuest , https://search-proquest-com.ezproxy.jccc.edu/docview/1443711707?accountid=2200. This is a good resource for looking at various health outcomes based on income. The short length may present a challenge in quoting from, however a lot of information is packed within.

i want a website like this
Ucraft is committed to preventing phishing, malware and other types of fraud. In case of noticing any actions that violate applicable laws, regulations or third-party rights, please file your report here.
Ucraft is a free website builder that provides web designers, marketers and business owners with a set of web design tools to start their next awesome project in minutes. No coding or designer skills needed. Go to Ucraft